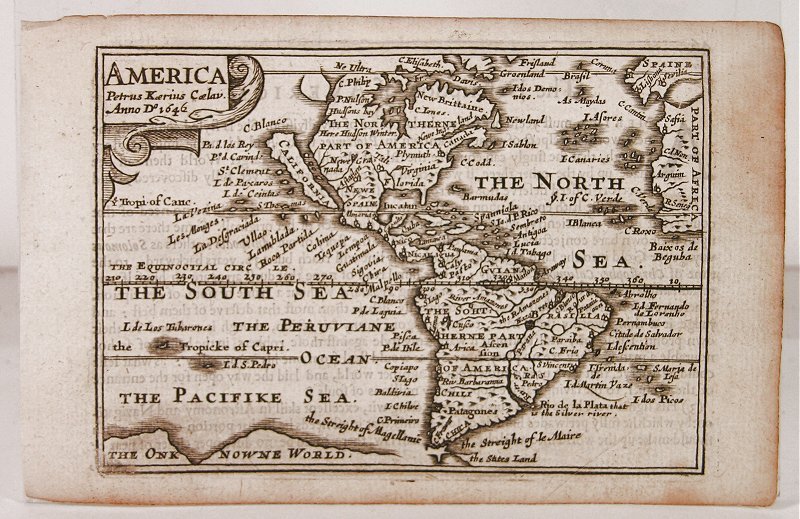 If you were holding this, you’d be holding the world in your hands. Or, the Western Hemisphere, at least, as interpreted in the mid-1600′s. It is an original, 1646 / 1662, “Miniature Speed” Map of the Western Hemisphere depicting North and South America. California, as you can see, is depicted as an island. The piece was engraved by Pieter van den Keere (also Petrus Kaerius). It is fully titled with a cartouche reading, “America / Petrus Kaerius / Anno Do 1646.” A pencil notation on the reverse identifies the map as being from the 1662 edition of Speed’s Pocket Atlas and engraved by Pieter van den Keere.

The reverse features text title “The Description of America.” The map shows the continents in full as known at the time and is taken directly from Speed’s important and influential 1627 map of the same name which, for its depiction of California as an island, has solidified its place in history. The original, 1627 rendering of this map is particularly famous, for it was the first atlas map upon which this misconception appeared and Speed’s depiction of the island of California was thus a major contributing factor in the longevity of this notorious myth. The inclusion of this map in Speed’s Pocket Edition did even more to disseminate the long held misconception. 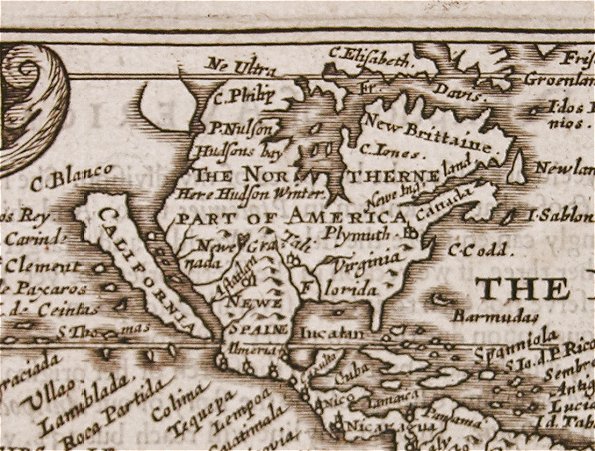 John Speed (1552-1629) was one of the most famous British mapmakers of the seventeenth century, and indeed perhaps the most popular of all with map collectors around the world. Historically, he is noted for placing England into the mainstream of map publishing, which had been dominated by the Dutch since the late sixteenth century. Speed began by issuing maps of Great Britain as early as 1611 in his famous Theatre of the Empire of Great Britaine. That publication contained maps of the entire British Isles, their kingdoms, and the counties of those kingdoms. Beginning in 1627, this was then accompanied by A Prospect of the Most Famous Parts of the World with maps of the world, its regions and its countries. Although Speed used many Dutch geographers and engravers, such as Jodocus Hondius and Abraham Goos, in his works and he copied many Dutch maps, his work is important in establishing a thriving British cartographic industry.

Pieter van den Keere, or Petrus Kaerius, was the engraver responsible for the maps which are now referred to as the “Miniature Speed’s” (including the Map of the Western Hemisphere offered here). Having fled the Low Countries as a refugee because of religious persecution, he arrived in London in 1584, and began his career as an engraver and cartographer. This was made all the easier as a result of his sister Colletta’s marriage to another refugee from the Low Countries who had recently arrived in London. His name was Jodocus Hondius – an already well-established engraver of maps. In the course of a long working life, Keere engraved a large number of individual maps for prominent cartographers of the day, but he also produced an Atlas of the Netherlands (1617-22) and county maps of the British Isles, as well as other countries of the World which have become known as “Miniature Speeds.” 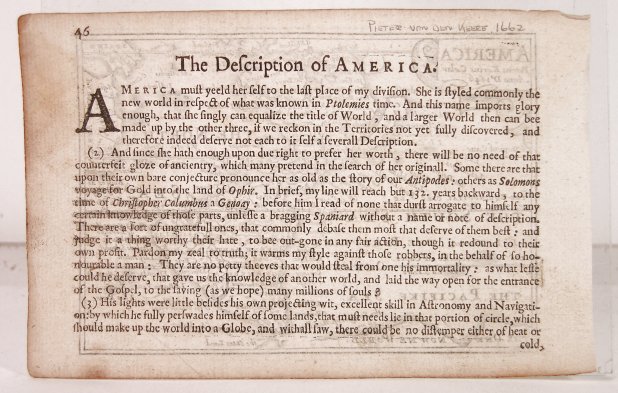 Highly collectable for a long time now, these tiny maps got their name when John Speed’s publisher, George Humble, issued a pocket edition of Speed’s Atlas in 1627, using plates Keere had engraved almost 20 years previously. He had used various sources for his plates, Saxton and Ortelius for the English and Scottish plates, and the famous map by Baptista Boazio for the Irish offerings. For his small pocket atlas, George Humble used the descriptive text of the large Speed maps (part of which is found on the reverse of the map offered here), and reduced in size a couple of these larger Speeds. However, the 40 or so of the van den Keere plates were the mainstay of the publication. The publication was a success and proved very popular, going through numerous re-issues right up until 1676. The name “Miniature Speed” for these maps was one that caught the imagination, and they are now almost universally referred to by that name.