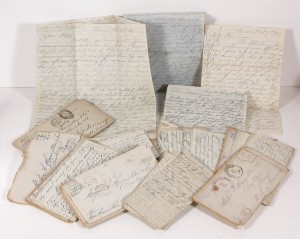 Lot of (34) very rare and fantastic, original 1884-5 Manuscript Letters written by Mrs. Minnie Hamilton Whitman from Bogota, Columbia while living there with her husband, Bernard Whitman who at the time was the chief engineer building Columbia’s first Railroad Line – the “Bogotá Savannah Railway”. Bernard Whitman died in Bogata, Columbia in late 1885. These Letters, sent to her mother in the United States give a simply amazing insight into life in the Republic of Columbia for an American family with young children as well as a treasure trove of information about the people, the natural history, the customs, the politics and life in general in and around the Capital City of Columbia.

These fantastic hand written Letters cover the period from September 22, 1884 to October 12, 1885 and range in size from 4 3/4″ by 8″ to 8″ by 11″. Each letter contains at least 4 pages but many are much longer – some as long as 16 pages. Some of the Letters include additional “insert” Letters written by the Whitman children to their Grandmother. Nine of the Letters retain their original envelopes (all stamps have been clipped).

These simply amazing and very rare, South American Letters came to us with a simply fascinating archive of Documents and Photographs spanning 3 generations of the Reverend Jason Whitman Family. Reverend Whitman was the son of Trinitarian minister Bernard Whitman and brother of Unitarian Ministers Nathaniel and Bernard Whitman. His son Bernard Whitman was an engineer and builder of Railroads who worked in South America building some of the earliest Railroads constructed there. Bernard died in Bogota while building Columbia’s first Railroad in 1885. Jason also had a son John Fairfield Whitman who served in the United States Navy during and after the Civil War and played an important roll in the Battle of Natural Bridge near Tallahassee, Florida. Much of the archive deals with the family of Bernard the younger and his wife Minnie Huntington Whitman who returned from South America with her children after her husband’s death and became a close associate of American Author and Unitarian Minister Edward Everett Hale working with Hale in the administration of Hale’s charitable organization known as the “Lend a Hand Society”.

While we have read only a smattering of pages from this extensive and rich collection of manuscript material, we have been amazed at the detail of daily life that Minnie Whitman communicates to her mother. She writes extensively about just what it is like for an American Family to live in Bogota in the 1880′s and does an amazing job capturing the “feel” of the city and the surrounding area. While nearly all of the Letters are written from Bogota there are a few from Barranquilla and Colon as the Family did travel while living in South America. This was not the first trip to South America building Railroads for Barnard Whitman, but it would be his last – he died of disease just one month after the last letter in this group was written.

The Letters offered here are a simply priceless treasure trove of information on 19th century South American history and culture and give a wonderful insight into just what it was like for an American family with young children to live in the city of Bogota.

All of the 34 Letters offered here are in very good condition. The hand writing is dark and bold and the penmanship very good making the letters easily readable. There is some scattered soiling and minor ink spots and the 9 envelopes included are rather worn but the Letters themselves are very well preserved and will reward the buyer with hours and hours of fascinating reading!! These Letters are fresh to the market and represent the entire archive from this period in the life of the Bernard Whitman – they are mostly unread and unpicked through and offer a wonderful chance for research!!

A fantastic archive of 34 Hand Written Letters dating from 1884 and 1885 written by Mrs. Minnie Hamilton Whitman from Bogota, Columbia while living there with her husband, Railroad Construction Engineer Bernard Whitman and their children and a fantastic addition to any collection!!