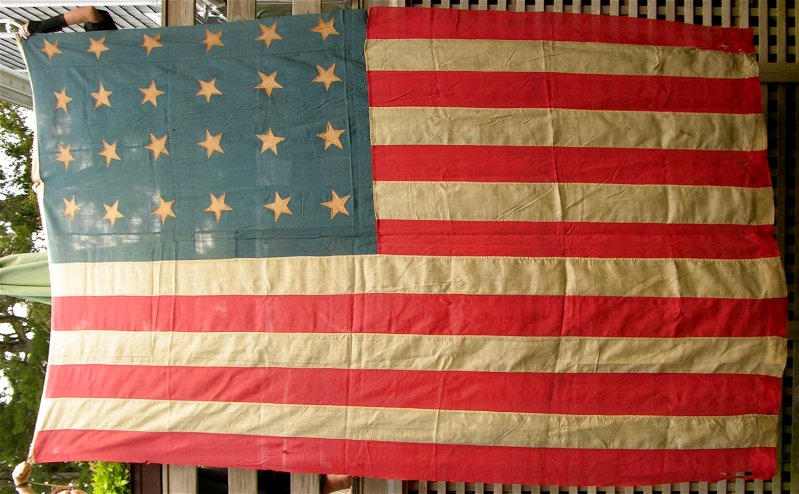 The Flag came to us without information on its origin,  but we know that the 24 Star Flag was in use from July 4th, 1822 (after Missouri joined the Union) until July 4th, 1836 (when Arkansas became the 25th state). Although this was a rather long period, 24 Star Flags are among the very rarest and most sought after by collectors. 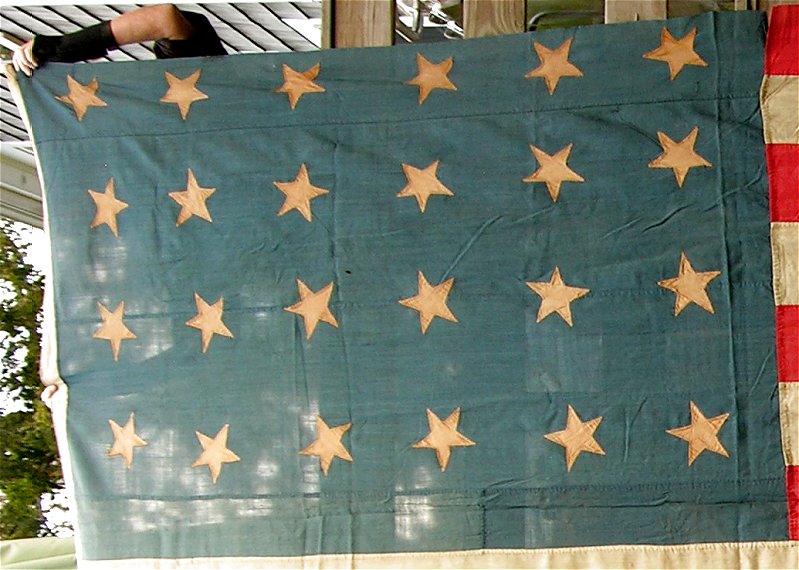 The outstanding research website “Rare Flags” by Anthony Iasso has this to say about the 24 Star Flag:

“Flags that pre-date the American Civil War are very rare. Those in certain star counts, such as this flag of 24 stars, are almost non-existent… Both 24 and 25 star flags are exceedingly rare, with just a small handful known to survive. Although among collectors smaller flags are generally more sought after, I’m personally very attached to these majestic large ship’s flags from the early-to-mid 19th century. Flags of this period were almost never made for personal use. The few survivors of the period were typically made for maritime or Navy use. They show the age and character of that time in American history where our sailing ships traveled the world, building up our nation’s trade and influence. These large flags were grand signals of our national presence, and they were often the first recognizably American symbol that people in foreign ports, unfamiliar with America itself, came to recognize as the symbol of our nation.”

Click Here to view one of the few surviving 24 Star Flags which is amazingly similar to the example offered here!! 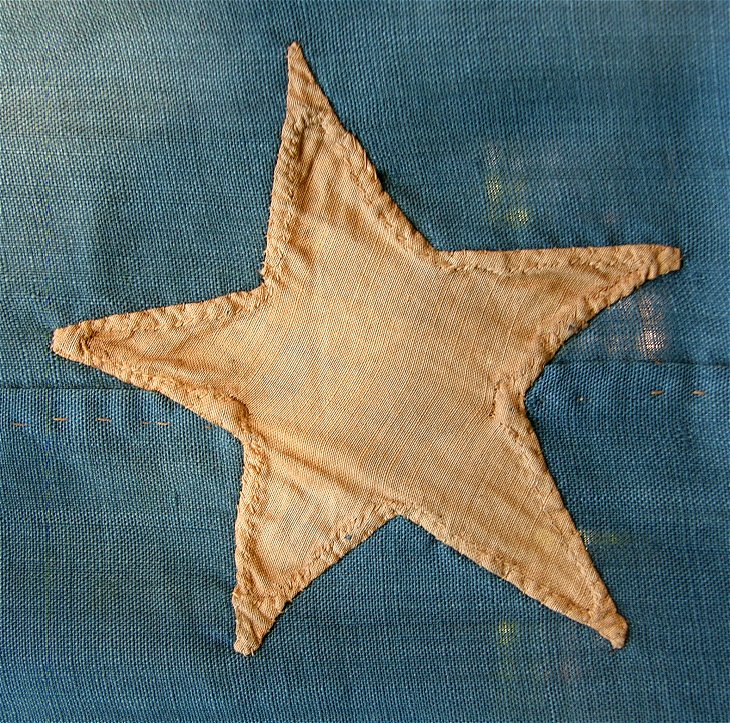 This particular 24 star Hand Made American Flag measures approx. 140″ by 85″ and is made of strips of red and white wool bunting type material with a blue canton with inserted white cotton stars. Every bit of the extensive stitching on this beautiful and historically important Flag is hand sewn including all of the repairs and patches. 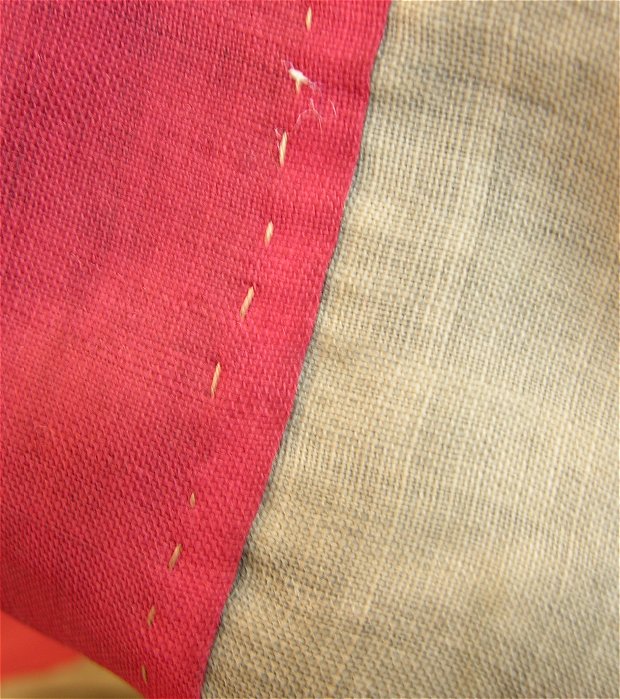 This Flag was not a factory production piece but a very large Flag made for a particular purpose likely as a Ship’s Flag. Although this Flag was official from 1822 to 1836, it was a period of peace and, since American Flags were not made for “home” use at the time, very few flags with this star count were made. We are told that 24 Star Flags are “almost non-existent” and only a small handful are known to have survived. 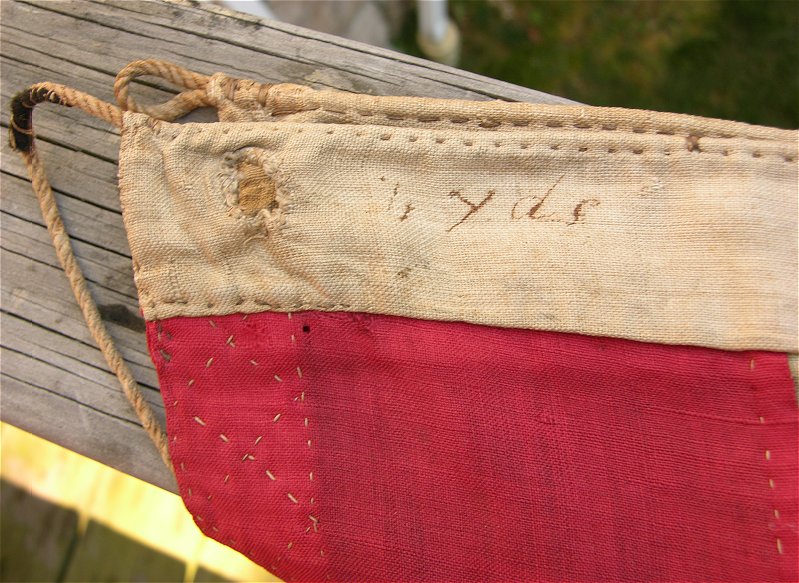 There no grommets on the hoist of the Flag but rather there is an original, braided rope cord sewn into the hoist with loops in the end of the cord for mounting the Flag on a pole or mast. There are 2 holes in the hoist – one near the top and one near the bottom. The borders of these holes have been hand sewn to create a reinforced “cloth grommet” There is a period, manuscript inscription in iron gall ink on the hoist that reads “4 yds” – indicating that the Flag is 4 yards long. The canton measures approx. 74″ by 47″. The 24 stars are arranged in four rows with 6 stars in each row. 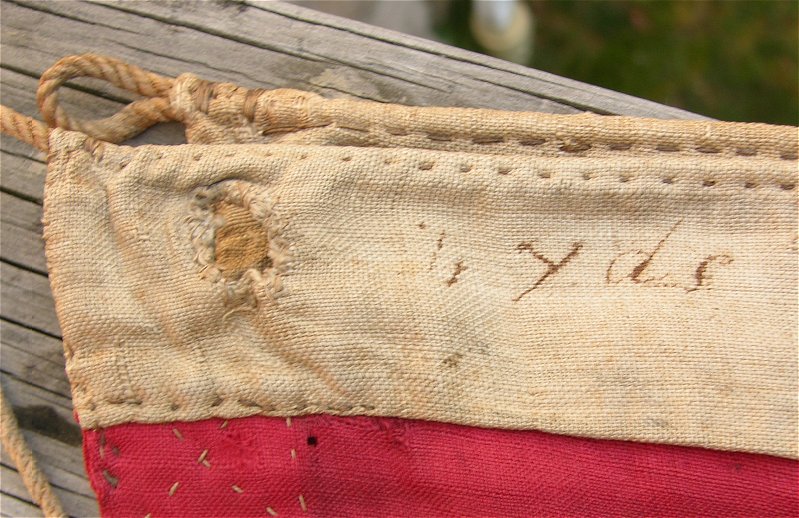 This is an exceptionally rare and historically important, 1820′s large size, Hand Sewn 24 Star American Flag and worthy of a place at the very center of even the most advanced Museum quality Collection! We are thrilled to have been able to have it if only for a brief time!! 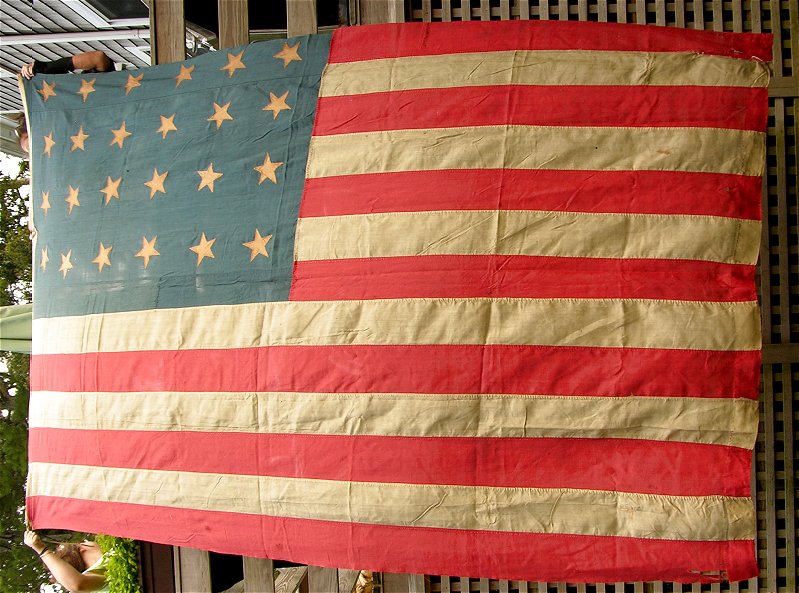 Like Loading...
This entry was posted in Americana, Current Auctions, Ephemera, Nautical History, Past Auction and tagged 19th century, antique. Bookmark the permalink.