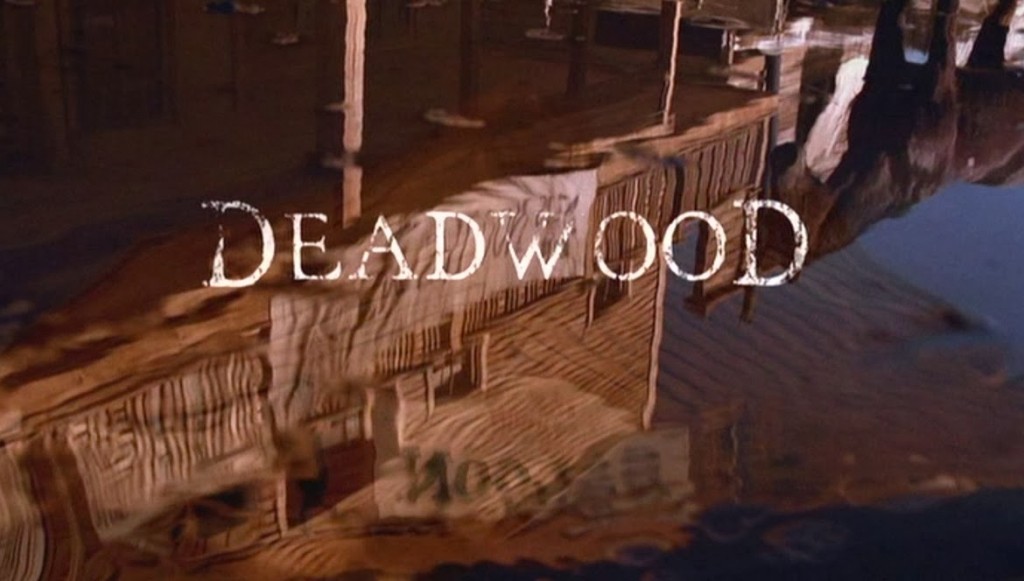 Many of us have heard of “Deadwood”, in part due to the successful American Western television series by the same name, created, produced and largely written by David Milch. The show is set in the 1870s in Deadwood, South Dakota, before and after the area’s annexation by the Dakota Territory. The Show, though fictional, does have many historical truths tied in with its fictional elements.  It has been reported that Milch used actual diaries and newspapers from 1870s Deadwood residents as reference in the creation of the show. Many historical figures appear as characters on the show—including Seth Bullock, Al Swearengen, Wild Bill Hickok, Sol Star, Calamity Jane, Wyatt Earp, George Crook, E. B. Farnum, Charlie Utter, Jack McCall, and George Hearst. 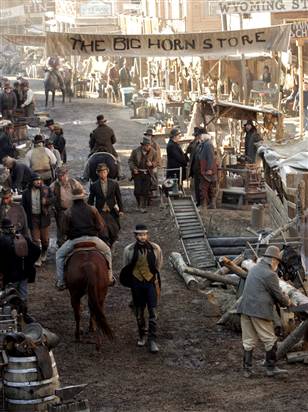 Image of street scene from the show “Deadwood”

Soooo… What is the REAL story?! Obviously the history is rich and fascinating, as the TV show implies, but which parts are real? What made Milch pick Deadwood as his subject matter? Well, lets find out! 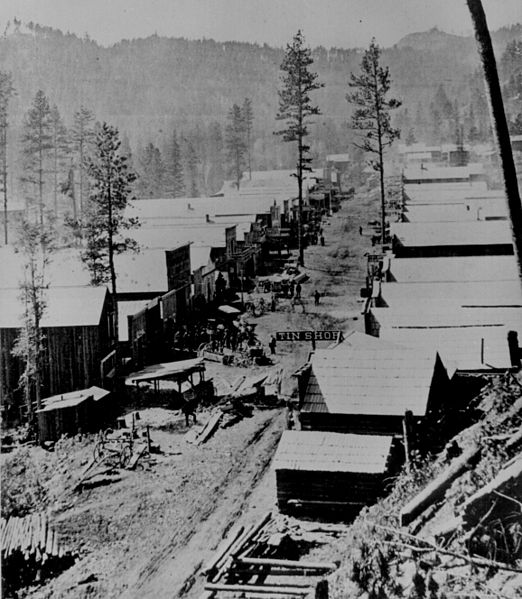 The illegal settlement of Deadwood began in the 1870s on the territory granted to American Indians in the 1868 Treaty of Laramie. The treaty gave permanent ownership of the Black Hills to the Lakota Sioux, in return for the Lakota’s promise of peace with pioneers and railroad workers. The great Oglala Chief Red Cloud (Mahpiya Luta) was a signer of this important agreement.

By 1870, stories abounded about gold and other wealth to be had in the Black Hills. Settlers continued to break the treaty by entering the Lakota reservation, which caused renewed Indian raids on nearby settlements. An expedition to investigate the possibility of establishing a fort in the Black Hills in 1874 resulted in the confirmation of gold being found in the Black Hills being announced by Colonel George Armstrong Custer the military leader of the expedition (it is interesting to note that though the expedition was said to be for the above stated purpose, for unexplained reasons a geologist and miners were included on the trip). As a result of this confirmation, one of the last great gold rushes in the country started shortly thereafter, though the government tried initially to discourage it. 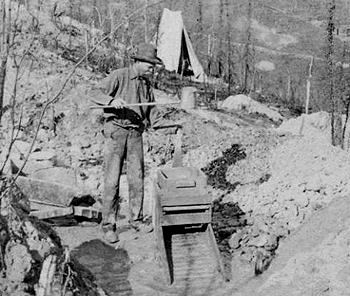 In 1876, miners moved into the northern Black Hills, where a miner named John B. Pearson found gold in a narrow canyon. The gulch was full of dead trees and became known as “Deadwood Gulch” and thus, Deadwood was born. 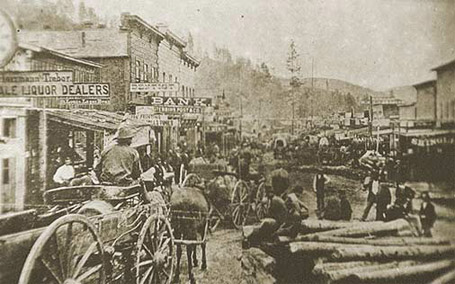 The mining camp soon swarmed with thousands of prospectors looking to get rich. Quickly the tents and shanties that originally popped upall around, began to be replaced by more permanent structures. 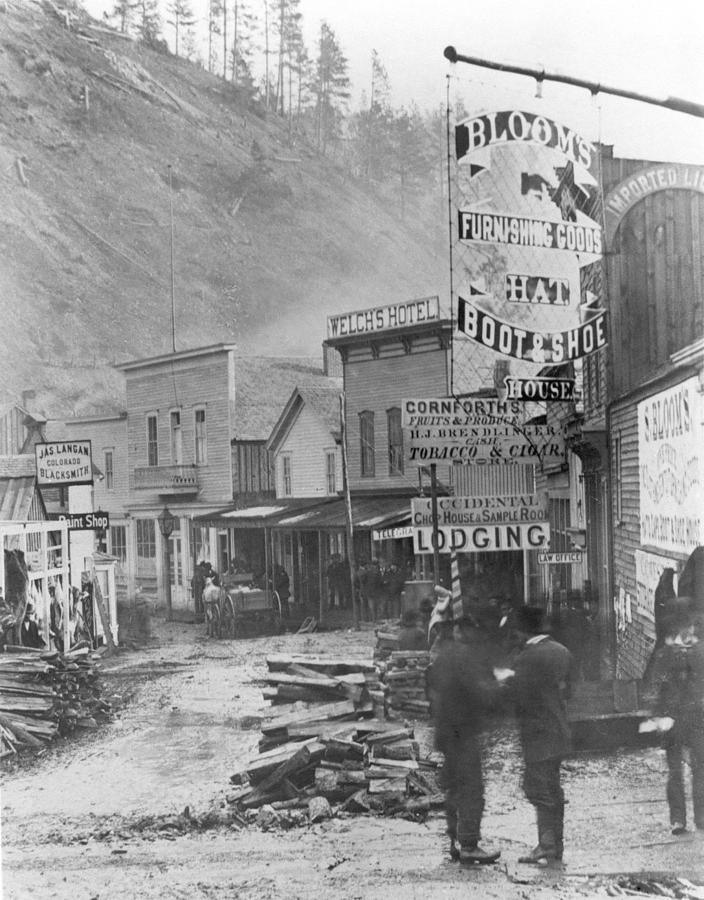 Though the majority of the original settlers of Deadwood were gold miners, the lack of law in the area attracted a rather rough crowd – an estimated one murder per day occurred during the first year of Deadwood’s existence! The Utter brothers (Charlie and Steve), led a wagon train to Deadwood to bring things said to be needed to increase the prosperity and business of the area. This wagon train included both prostitutes and gamblers, which were both thought to be important additions to this wild town whose population was mostly made up of men. Saloons, dance Halls, Brothels and Gambling establishments flourished, with prostitution becoming especially profitable, with an astonishing 90% of the women in Deadwood being prostitutes. Businessman Tom Miller opened the Bella Union Saloon in September of that year (why David Milch changed Miller’s name to Cy Tolliver is anyone’s guess). 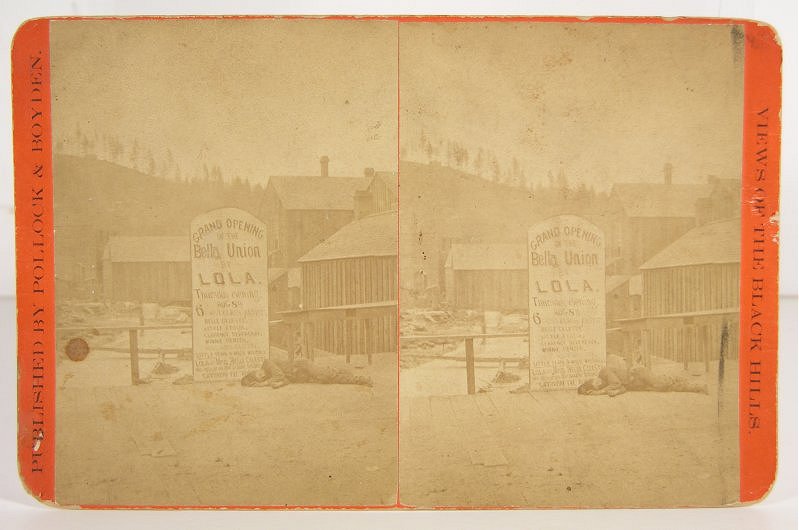 The Bella Union was a saloon and theater in Deadwood, South Dakota, which opened on September 10, 1876. The proprietor was Tom Miller, an aggressive businessman who would buy several neighboring properties as well. The Bella Union Saloon was a relatively upscale establishment, where town meetings came to be held. In November 1878, Tom Miller went bankrupt, and the Bella Union became a grocery store downstairs, and a meeting hall named Mechanics’ Hall upstairs. A fictionalized version of the saloon appeared in the HBO television series “Deadwood”, where the owner was the character Cy Tolliver. In the 1953 musical, Calamity Jane, the character Henry Miller (not Tom), is the proprietor of the town’s saloon and theater. 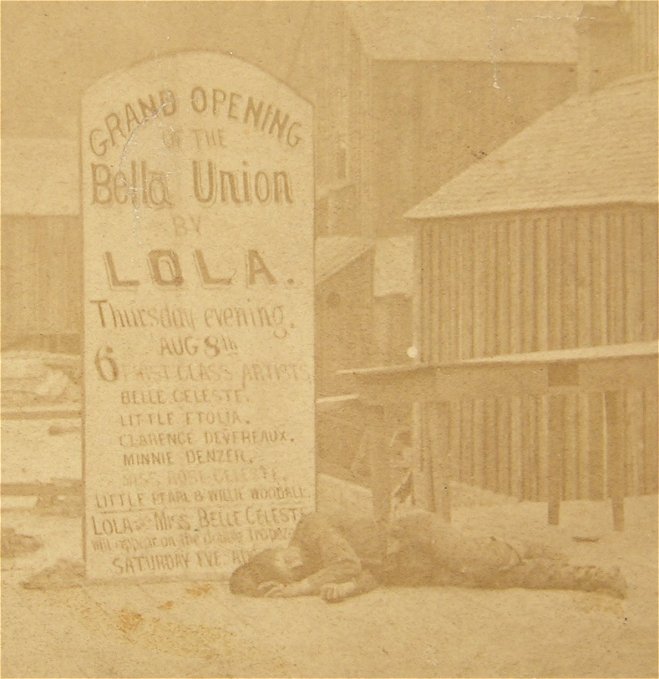 There was no lack of characters living in and / or passing through the Town. Some of the early town residents and visitors included Lewis and Clark, Wyatt Earp, Poker Alice, the Sundance Kid, E. B. Farnum, Charlie Utter, Sol Star, Martha Bullock, A. W. Merrick, Samuel Fields, Calamity Jane, Dr. Valentine McGillycuddy, the Reverend Henry Weston Smith, Aaron Dunn and Wild Bill Hickok. 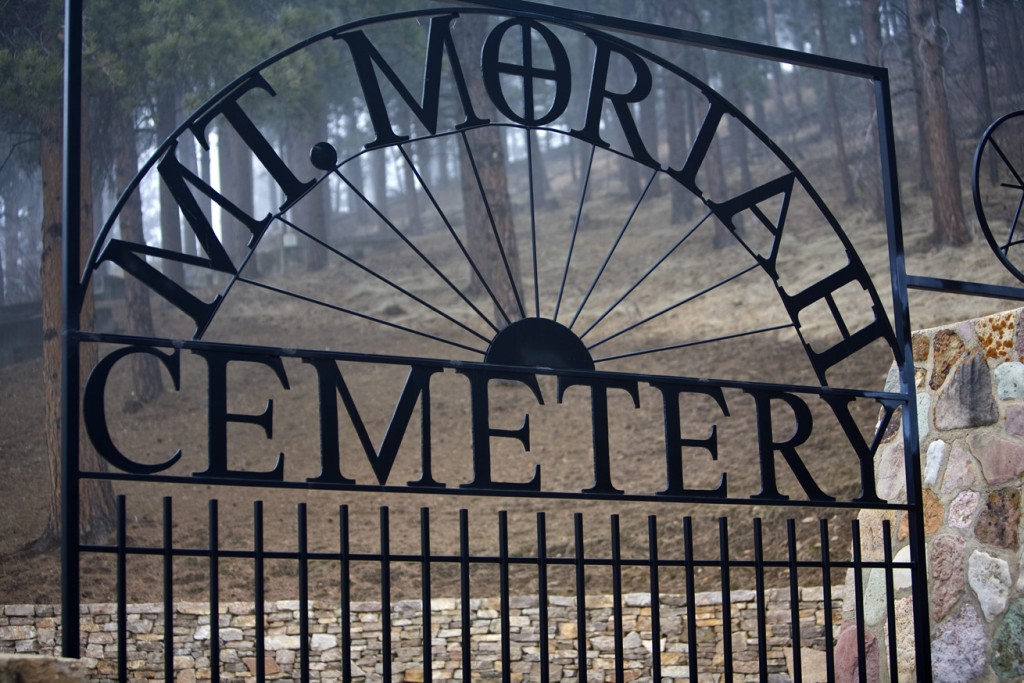 Both Wild Bill Hickok and Calamity Jane call Mount Moriah Cemetary their final resting place. Deadwood was actually the site of Hickock’s murder, and then the ultimate hanging of his murderer Jack McCall, who was prosecuted twice despite the U.S. laws against it. 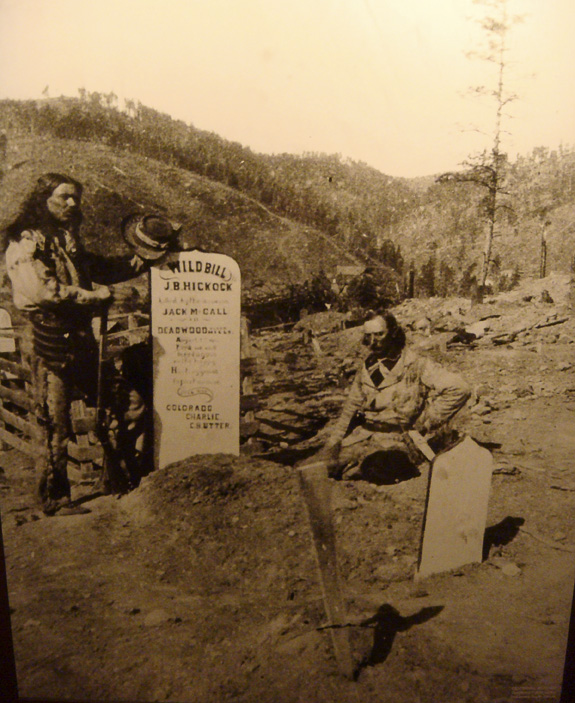 Eventually Deadwood became more prosperous, and began to lose some of its rough and rowdy character. In March of 1877 Seth Bullock was appointed sheriff to keep law and order. 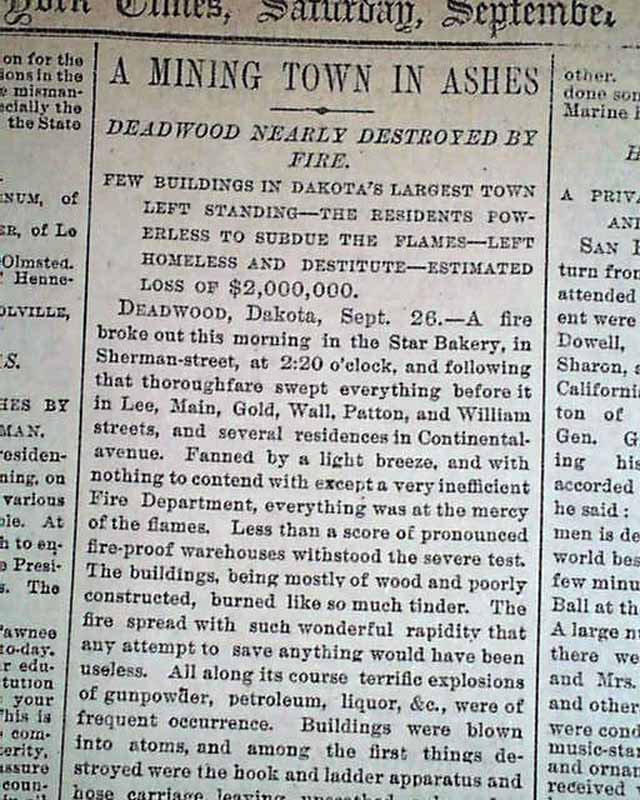 On September 26, 1879, a fire started in a bakery and devastated Deadwood, spreading through the business district of Deadwood and destroying more than three hundred buildings. Many of the unlucky left town to start again elsewhere without having fulfilled the early dreams of Deadwood. 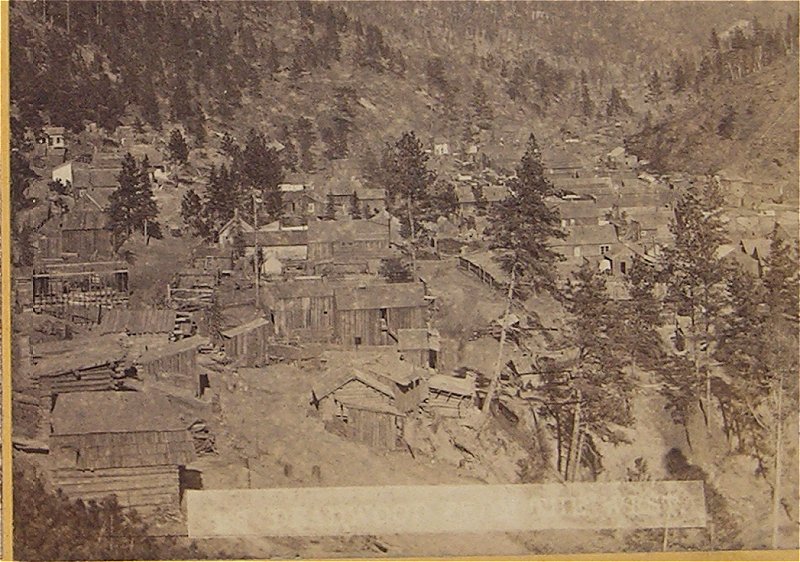 ca1880, Bird’s-Eye-View Photograph of the Mining Town of Deadwood

There is so much more information out there on this fascinating town and the people that traveled through it! I honestly did not even begin to scratch the surface of it!! Suffice it to say, now that my interest has been piqued, I will be looking into more on Deadwood, and its residents and patrons! Be sure to check back soon to see what else I have unearthed!!