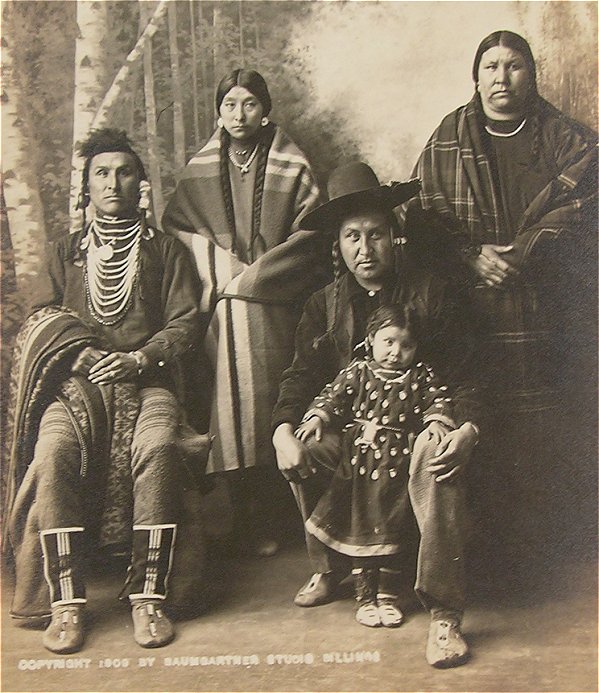 An early Billings, Montana photographer, Alfred Baumgartner had a studio on Minnesota Avenue which opened in 1906 and closed just a few years later. Little is known of his work except that he was certainly a true Western Photographer – had a “cowgirl” in his employ at the studio and most of his surviving works are in studio portraits of local Billings, Montana residents. We recently purchased a small collection of simply fantastic and stunningly beautiful, Art Photo style portraits of Native American Crow who lived on the expansive Crow Indian Reservation south of Billings, that were taken and copyrighted in 1906 by Alfred Baumgartner.

As far as we can tell Baumgartner, never published this or any of the Crow Images in this wonderful collection as we can find only a single example of a Native American Photograph by Baumgartner in any museum or library collection (that photograph is of Crow Chief Plenty Coups and is held in the collection of the Yellowstone Western Heritage Center- image can be found here). We believe this beautiful Photograph may be the only known example or at the very least exceptionally rare.

Each Photograph in this collection is very much in the style of Carl Moon with a soft, warm “feel” to the Image and a respectful treatment of the subject, and most features a wonderfully appropriate and beautiful painted backdrop and the high quality and stunning beautiful, embossed card mount that complete the artistic presentation. There is text in a number of the negatives, or stamped on the recto, that reads “Baumgartner Studio, Billings, Mont.”. 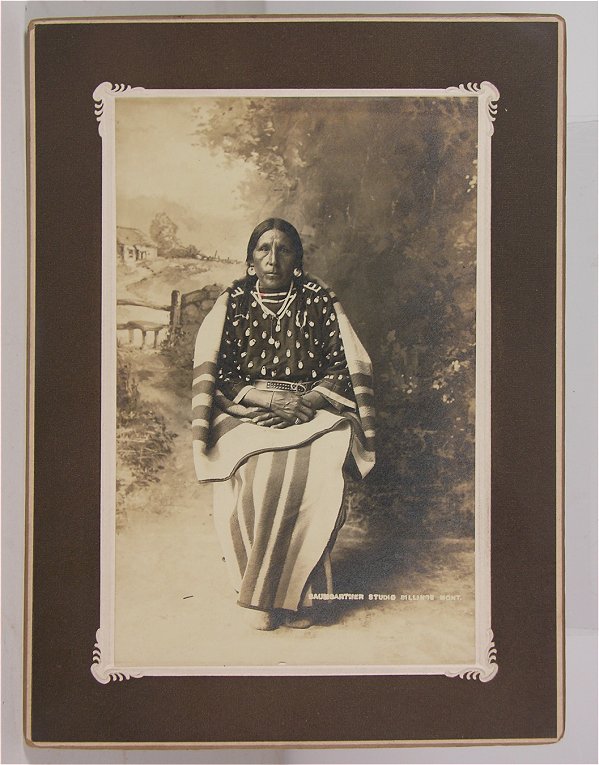 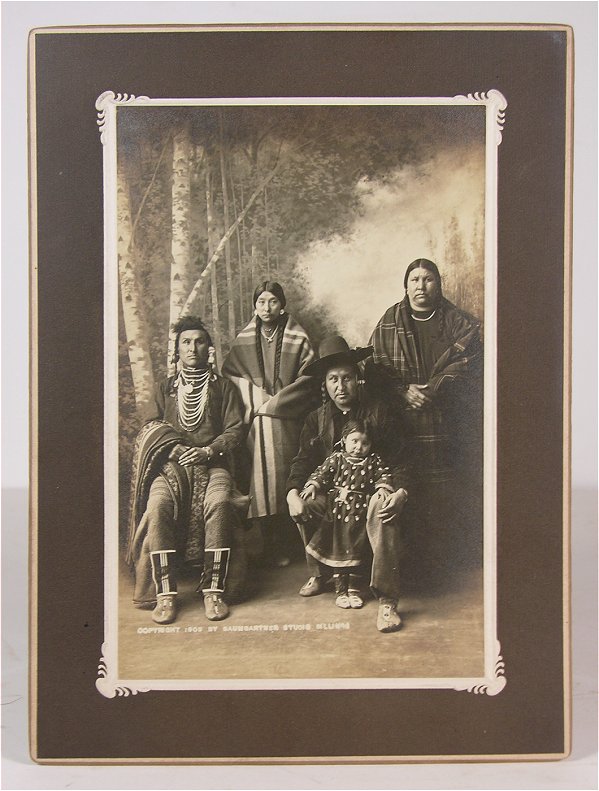 Photographic portrait of an unidentified Crow Warrior dressed in traditional garb with an elaborate, multi-strand necklace and with typical Crow hair style along with his wife. Also in the Photo is a second Crow brave dressed in much more western style clothing with his wife and young child . (We feel that we have seen this Crow Brave at the left before but we have been unable to identify him. Any information regarding his identity would be greatly appreciated.) 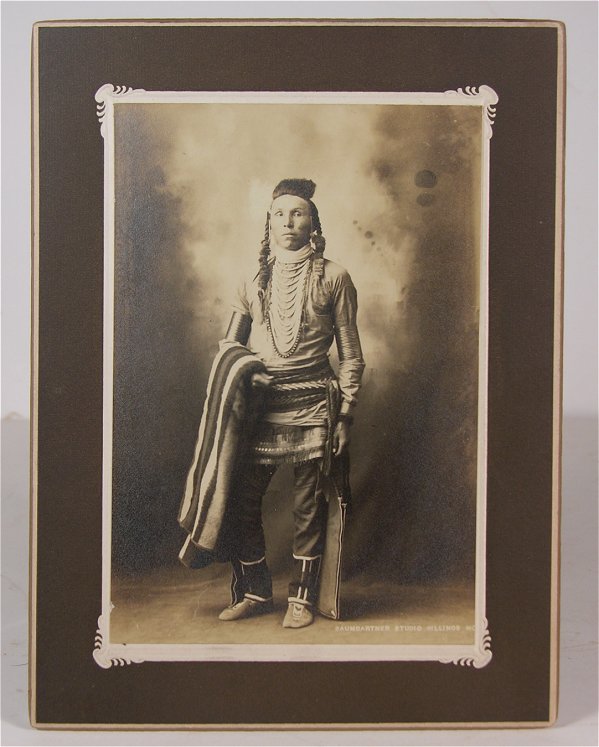 Studio full length portrait Photograph of an unidentified Crow Warrior dressed in traditional garb with an elaborate, multi-strand necklace and with typical Crow hair style. (We feel that we have seen this Crow Brave before but we have been unable to identify him. Any information regarding his identity would be greatly appreciated.) 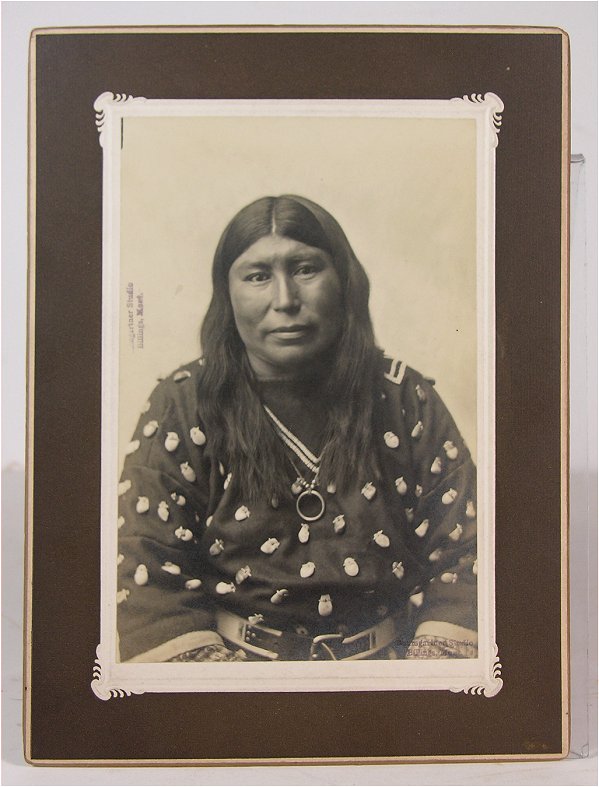 This Photograph is a half figure, studio portrait of Strikes the Iron dressed in a wonderful, elk tooth tunic.  (The subject is not identified but the wife of Chief Plenty Coups was photographed numerous times in her life and she is easily recognizable.) 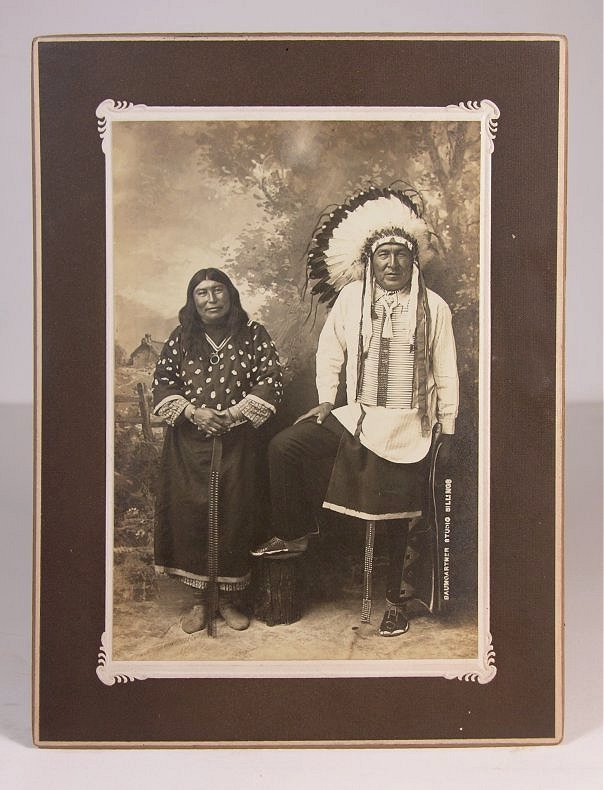 This Photograph is a full figure, studio portrait of the Plenty Coups and his wife Strikes the Iron dressed in a combination of traditional and western garb with Plenty Coups wearing his full eagle feather war bonnet and a pipe bone breastplate.

The last traditional Chief of the Crow Nation, Plenty Coups was a visionary that led his people from the ‘Buffalo Days’ into the 20th century. He was an accomplished statesman and ambassador well known by several US Presidents and foreign leaders. Chief Plenty Coups best illustrated the close bond between the US and Crow Nation when, in 1921, he offered his war bonnet and coups sticks at the dedication of the Tomb of the Unknown Soldier. In his speech, he promised the allegiance of Crow warriors to fight any enemy of the United States. His promise has been upheld countless times in wars or armed conflicts since that gathering. The Chief was a leader by example – he was a productive farmer and stockman, expert steward of his 1885 allotment, and a supporter of education. In 1928 Plenty Coups and his wife, Strikes the Iron, willed their home and land as a place for all cultures to come together in a cooperative nature. Their homestead is now Montana’s Chief Plenty Coups State Park. The Chief did not dedicate this location to glorify himself or his deeds, but to honor the culture of the Crow Nation and to bring people together.