Pictured here is the 1st edition of this important map of the Western United States, which, with its accompanying Emigrant’s Guide, has been widely and frequently praised as the most accurate and current information then available in separate cartographic form for the regions shown. According to the accompanying Volume, “The chief authorities from which the map is compiled, are the Congressional Map of Texas, 1844, Kennedy’s Map of Texas by Arrowsmith, Mitchell’s Map of Texas, Ward’s Map of Mexico, Frémont’s Map of his explorations in Oregon, California, &c., 1842, 1843, 1844, Map of Lewis and Clarke’s tour, Major Long’s tour to the Rocky Mountains, Nicollet and Frémont’s exploration of the country between the Mississippi and Missouri, the Congressional Map of the Indian territory, and Mitchell’s Map of the United States.” 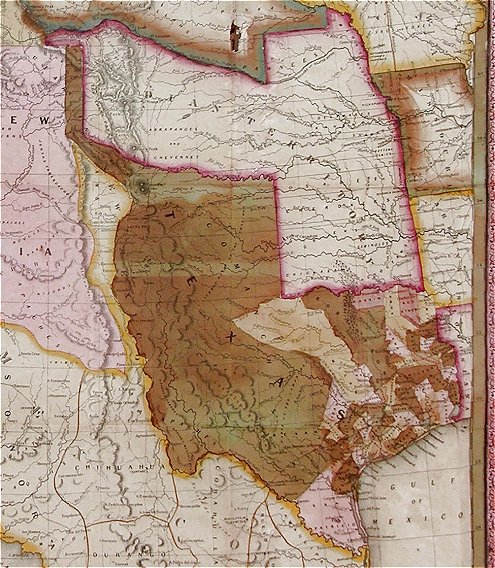 The map shows in detail the western portion of the U.S. to the Pacific, with the Indian Territory, Missouri Territory, Iowa, and portions of the states of Missouri, Arkansas, Louisiana, and Wisconsin, as well as northern Mexico and part of British Columbia, illustrating in detail the trans-Mississippi region at a time when war was imminent with Mexico.

Great attention has been given to Texas, and the map includes a VERY early depiction of Texas as a state of the Union, complete with all its extravagant territorial claims, including a Panhandle that stretches aggressively north to the 42nd parallel and a border on the Rio Grande River. This map has been updated, however, to show Texas divided into counties instead of empresario grants. 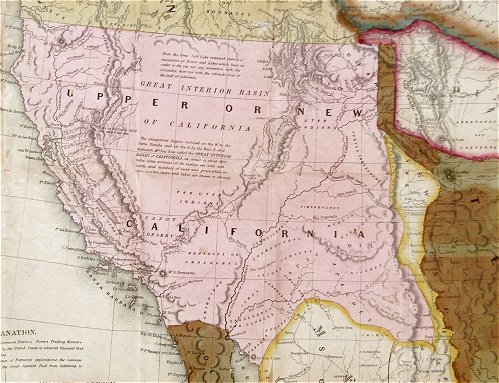 For those contemplating the journey West, the Oregon Road and the Santa Fe Trails from Independence, Missouri, are shown, and a table of distances between Westport and Oregon City is printed. Yet, even with these advances, the map also makes clear the vast stretches of Old Mexico and the West that remain unknown and unexplored. Much of California and the rest of the West is portrayed as basically featureless; “California” occupies the entire area of modern-day California, Arizona, Nevada, New Mexico, Utah, and Colorado. 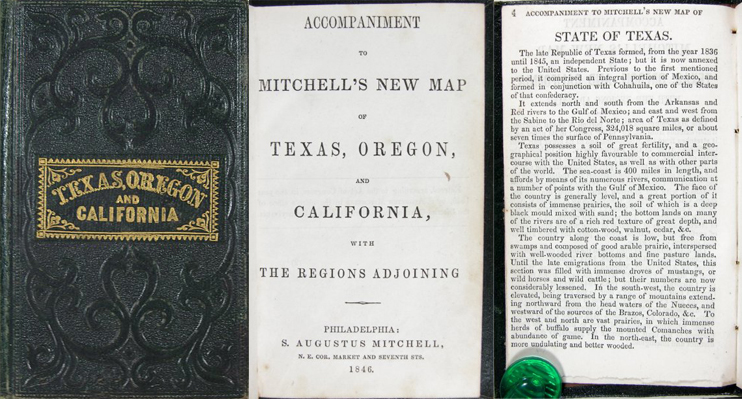 Much of the information the map lacks, is supplied by the accompanying guide, which discusses Texas, Oregon Territory, California, Iowa, Indian Territory, and Missouri Territory, with the majority of the text devoted to the first three. Some of the remarks about Californians are astounding in several respects, even for the time:

“Descended from the old Spaniards, they are unfortunately found to have all their vices, without a proper share of their virtues…. Their amusements are cock-fighting, bull and bear-baiting, and dancing…always accompanied with excessive drinking…. The female portion of the community are ignorant, degraded, and the slaves of their husbands…. The Indians of Upper California are indolent and pusillanimous…they are all extremely filthy in their habits.” (pp. 28-29)

On the other hand, Texas, the success of which Mitchell clearly wishes to promote, is made to sound like an earthly paradise. Oregon, which Mitchell wants the United States to incorporate, is also described favorably at great length. By contrast, the Missouri Territory is only briefly touched upon, in an almost dismissive manner.

If you are interested in learning more about this item, please see our eBay listing.