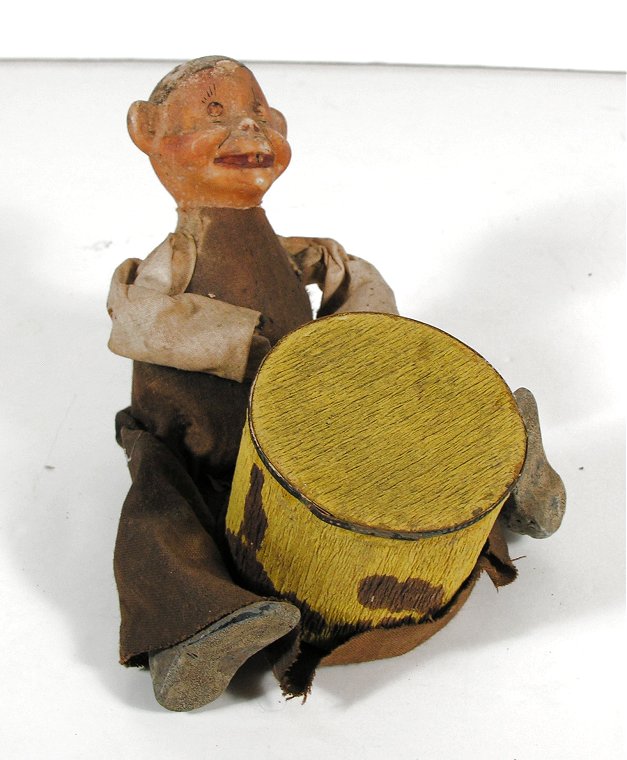 Pictured above is what is believed to be a previously cataloged, circa 1896 Richard Outcault “Yellow Kid” Wax Head Full Figure Doll Candy Container (click here for a history of the evolution of the Yellow Kid). Extensive research has been unable to discover another example of this early, newspaper comics character having surfaced, nor any mention of the container in the extensive references pertaining to Yellow Kid Collectibles.

The Yellow Kid was the name of a lead comic strip character that ran from 1895 to 1898 in Joseph Pulitzer’s New York World, and later in William Randolph Hearst’s New York Journal. Created and drawn by Richard F. Outcault in a strip entitled Hogan’s Alley (and later under other names as well), it was one of the first Sunday supplement comic strips in an American newspaper. The Yellow Kid is also famous for its connection to the coining of the term “yellow journalism.”

Mickey Dugan, better known as The Yellow Kid, was a bald, snaggle-toothed boy who wore an over-sized yellow nightshirt, and hung around in a slum alley typical of certain areas of squalor that existed in turn of the 19th to 20th century in New York City. Hogan’s Alley was filled with equally odd characters, mostly other children. With a goofy grin, the Kid habitually spoke in a ragged, peculiar ghetto slang, which was printed on his shirt, a device meant to lampoon advertising billboards. 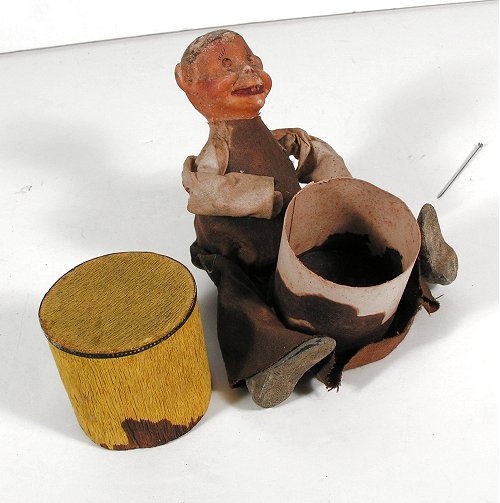 This apparently previously unknown Yellow Kid Candy Container features the Yellow Kid doll seated with a large drum between his legs. The delicate, thin paperboard drum is covered with an even more delicate, yellow crepe paper, and the top and sides of the drum slide off the base revealing the container which held the candy. The Yellow Kid doll/figure features a wax head, wax hands, and some type of papier-mâché composition shoes. His torso is solid and appears to be contiguous with his head. It is also likely made of wax. He wears a stiff, cloth nightshirt or tunic that appears to have originally been off-white in color (though possibly a light yellow), but is now mostly a dark brown. It appears that he may have originally worn a small hat (there is a small hole in his head and a small ring around the hole that appears to be a “shadow” of where a hat may have been.

The candy container measures approximately 4” tall to the top of the seated Yellow Kid’s wax head, and 4” by 4” at the base (measured from the soles of the Kid’s shoes to his upright back and across his widely spread legs). The drum shaped paper container itself measures approx. 2” tall and 2” in diameter across the head of the drum.

Although the candy container is not marked in any way, there is absolutely no doubt that this is the Yellow Kid – besides his trademark, floor length nightshirt/tunic and the fact that he is “beating the drum,” the figure’s wax head distinctly shows the characteristics of Outcault’s comic creation. This includes two large front teeth (the Kid was often called “snaggle-toothed”), very large ears that are perpendicular to his head, and the trademark Yellow Kid “goofy grin.” 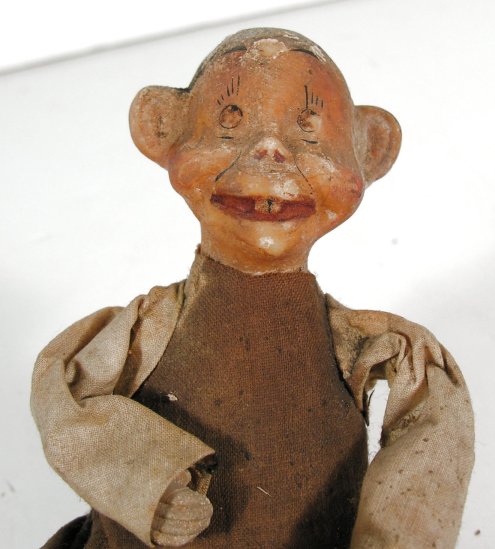 While the cloth nightshirt of the Yellow Kid is complete and intact, it has been stained a uniform, dark brown color (all of the nightshirt except the arms and the top of the back), and there are blotches of a similar brown color on the sides of the Drum. It appears to us that the original candy contained in the Drum melted or deteriorated in some way and caused this staining. The pattern of blotches on the sides of the Drum actually give it the “look” of an “animal skin” surface which, in truth, is quite attractive (although not original). The fact that the body of the Yellow Kid’s Nightshirt is quite uniformly stained dark brown and the arms remain light, creates a rather appealing look also (again, however, not original).

While we were able to uncover a number of very rare and highly desirable wax head doll candy containers from the late 19th century, we have found no mention in any of the references, nor any online references, to a Yellow Kid Candy Container such as the one offered here. We believe that it may, in fact, be a previously unknown Yellow Kid item and perhaps the only known example. Any information regarding the rarity and/or manufacturer of this fantastic Yellow Kid Candy Container would be greatly appreciated!!!

If you are interested in learning more about this item, please see our eBay listing.