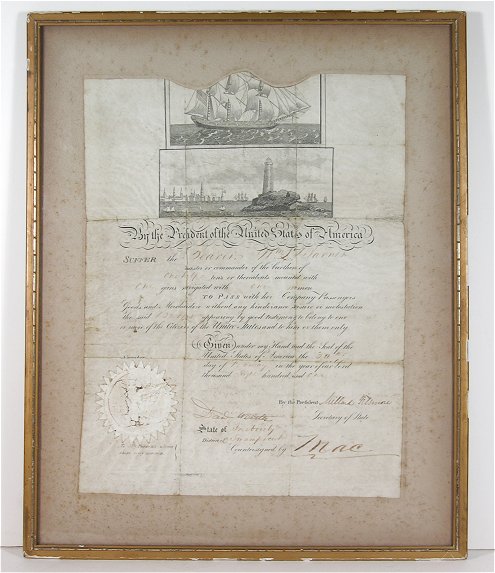 The “Mediterranean Passport” (more commonly referred to as a “Ship’s Passport”) was a document issued by the United States Government from 1795 through the mid-19th century to American Ships leaving port and headed to Europe or Africa. The document identified a ship as being protected under a treaty between the U.S. and states of the Barbary Coast. Known today as the Barbary pirates, these North African states required countries to pay tribute in exchange for not capturing that country’s ships and crews. These passes identified ships that had safe passage.

The document pictured above appears to be a typical, circa 1851 Vellum Mediterranean Passport/“Ship’s Passport” of the 19th century. It is signed by Millard Fillmore as President of the United States, and Daniel Webster as Secretary of State. This document is quite a unique instrument, however, as it was apparently issued as a prank or joke by a Customs Collector at Marblehead, Massachusetts.

Document measures approx. 11 ¼” by 15 1/8” and is printed on vellum stock. It features beautiful, engraved images of a sailing vessel and harbor scene with lighthouse at the top. The top edge is scallop cut – as was the practice to irregularly cut the top “coupon” portion of a Ship’s Pass and send that section to officials along the Barbary Coast, so cruisers from those ports would have samples for comparison with the edge of a document presented by a foreign ship. The document features an applied, water seal of the United States of America at the lower left hand corner.

What makes this document unique and a simply amazing example of an otherwise rare but familiar historical item, is the fact that it was not issued to a sailing ship leaving an American port for foreign waters, but was issued by a Customs Collector to a private citizen and friend (perhaps a seaman or ship’s captain) as some type of joke or comic prank. 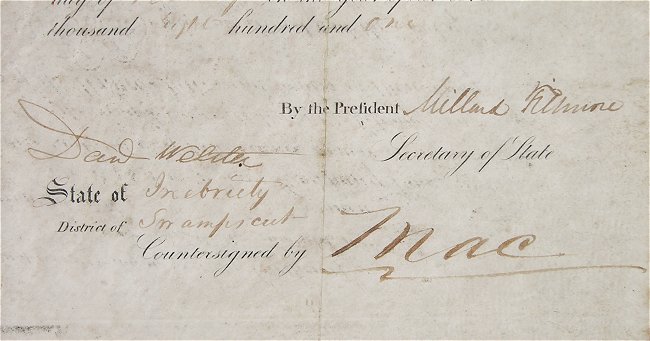 The pass is filled out to “Bearer Wm. L. Barnes” for a “one-gun” vessel of “under a half ton” to “navigate with one woman” – clearly this part is some type of jest. The document is dated “30 February, 1801” (when Millard Fillmore was barely one year old). It is further filled out from the “State of Inebriety, District of Swamps cut.” The countersignature (the place where the District Customs Collector, who had the duty to fill out these Ship’s Passports, would have signed the Document) is simply a large “Mac.”

The document is absolutely and unquestionably original and period. Fillmore took office July 9, 1850, and Webster died in 1852, so it surely dates from this period. The circumstances of its issue are, as yet, undiscovered. We have not been able to identify Barnes or “Mac,” but do believe that “Swamps cut” refers to the port town of Swampscott, Massachusetts, which was part of the Marblehead District. Documents such as this one would have been issued by the Customs Collector at Marblehead, Mass. 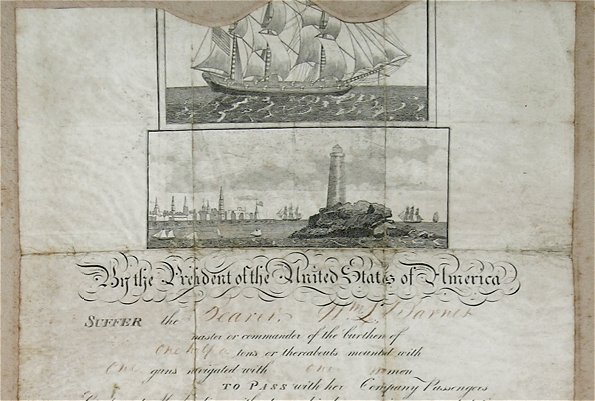 Why a Customs Collector would appropriate an official document – SIGNED BY THE PRESIDENT OF THE UNITED STATES AND THE U.S. SECRETARY OF STATE – and issue it as part of some sort of jest is hard to understand, and we have NEVER heard of another such document coming to light. 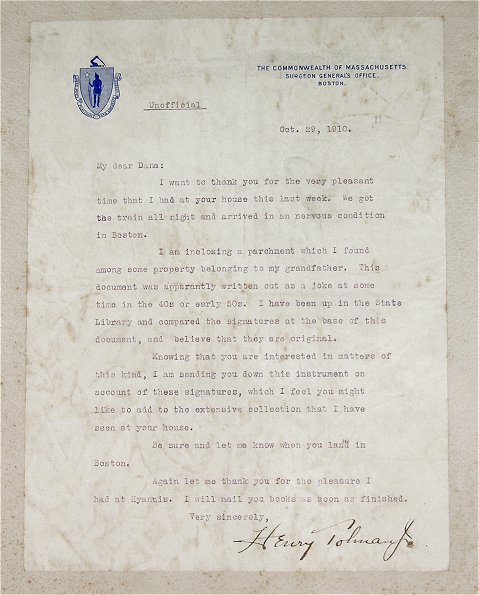 The Ship’s Passport was discovered with a letter of transmittal further documenting its origins. That letter is a typed letter signed by Henry Tolman Jr. of the Massachusetts Surgeon General’s Office. Tolman notes that he found the document in his grandfather’s papers, and is conveying it to a friend who is an autograph collector, stating that the signatures are genuine, but making no mention of the circumstances regarding the content. He also states that his grandfather received the document sometime in the “40’s or early 50’s.” Tolman’s letter is dated Oct. 29, 1910.

There is no doubt that this perplexing document is worthy of further research – there is certainly a fascinating story to be uncovered here, and we have only begun to scratch the surface of the available research avenues.

ANY INFORMATION THAT MIGHT HELP UNCOVER THE HISTORY OF THIS FASCINATING DOCUMENT, WOULD BE GREATLY APPRECIATED!!!

For more pictures and details about this item, please visit our Ebay listing.