Ann E. Leak was born without arms in Georgia in 1842. Her mother’s physician predicted that she would die within a few days but she survived and, while behind others her age in learning to walk, she eventually learned to use her feet as most use their hands. She became so adept at using her feet that she could skillfully sew and braid hair!

Like many Southern families, the Leaks lost their money and livelihood during the Civil War, so Ann did all she could to support both herself and her family. For a while she gave classes in braiding, but the money wasn’t enough to support both her and her parents, so she, reluctantly at first, chose to exhibit her skills. She first appeared at P.T. Barnum’s American Museum in New York. It was not easy for Ann, but eventually she reconciled herself to the life of a “sideshow attraction.” She wrote poetically in her autobiography about the life she had chosen:

Only the conviction that it seemed best, reconciled me to it. My lot was not one of my own choosing, but such as Providence had assigned me, and my feet seemed to be directed in the path that I was about to tread. It is the doom of man that his sky should never be altogether without clouds.

Ann eventually traveled around the eastern United States under the name “Ann E. Leak – Born Without Arms,” and while being taken advantage of a few times, for the most part those she met in her travels treated her very well. She eventually married and traveled under the name Ann Leak Thompson. 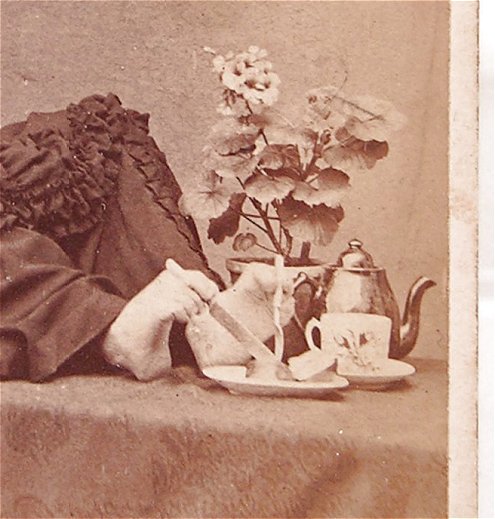 As with many handless and armless sideshow performers, Ann would sell CDV photographs of herself as an additional source of income. It was her habit to inscribe these photos with inspirational messages related to the challenges of her life (and the lives of all men) similar to the one found on the CDV pictured above. 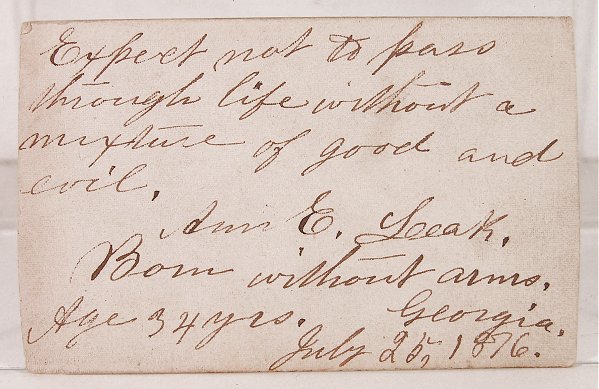 The image above has an inscription on the back, written by Ann with a pen held between her toes. The Inscription reads “Expect not to pass through life without a mixture of good and evil. / Ann E. Leak, Born without arms, Georgia. / Age 34 years, July 25, 1876.”

Much of the information about the life of Ann E. Leak is taken from this wonderful web site.