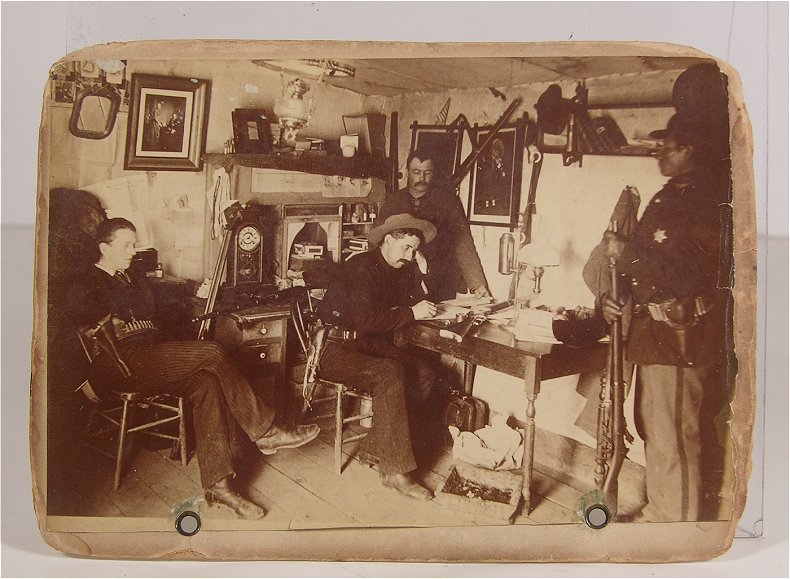 This is a truly amazing January 1891, Albumen Cabinet Card Photograph of a small log cabin behind the Post Office at the Pine Ridge Agency in South Dakota – the location from which the first news reports about the Wounded Knee Massacre were written. In this photo we see U.S. Marshall George Bartlett, writer / archeologist / anthropologist Warren King Moorhead, an Indian Police sentry in full uniform and a third, unidentified white man believed to be Louis Mousseau who lived in the cabin and ran the Post Office / Store. The Photograph was likely taken by George Trager (or one of the photographers working with him) and a drawing taken from this Photograph was published in an early January 1891 edition of the American Illustrated Weekly Newspaper. We can find absolutely no information about this photograph other than the caption in the Illustrated Newspaper – we believe that this may be the only know example of this important image.

This Photograph has absolutely no identification, nor a photographer’s mark but our extensive online research turned up the fascinating story of this wonderful image. As far as the photographer is concerned, we know that Warren King Morehead (pictured at the left) was the only news reporter on site in the days following Wounded Knee that had “his own photographer”. There is some confusion in many of the pictures associated with Morehead, because on top of having “his own photographer”, he also in many instances took photos himself. In this particular case it appears most likely that Morehead engaged one of the few photographers who were present at Pine Ridge in the days following the “Battle”, all of whom were employed by George Trager.

The Photo is a truly amazing tableaux with Warren King Moorehead seated wearing a revolver in a holster attached to a belt loaded with cartridges. A large caliber, double barreled shotgun leans against a clock behind Mooreheads chair. Pine Ridge and Deadwood, South Dakota Deputy U. S. Marshall George Bartlett sits at a table writing furiously. Bartlett also has a substantial six gun in a holster at his belt and a beautiful, Winchester Repeating rifle on the table in front of him. The Indian Police Sentry also wears a revolver in a holster on rig studded with cartridges and holds his Springfield rifle in front of him. This room is cluttered but certainly chock full of weapons with a large caliber rifle leaning against the wall behind the unidentified gentleman and another rifle on the desk to the right of Moorehead. 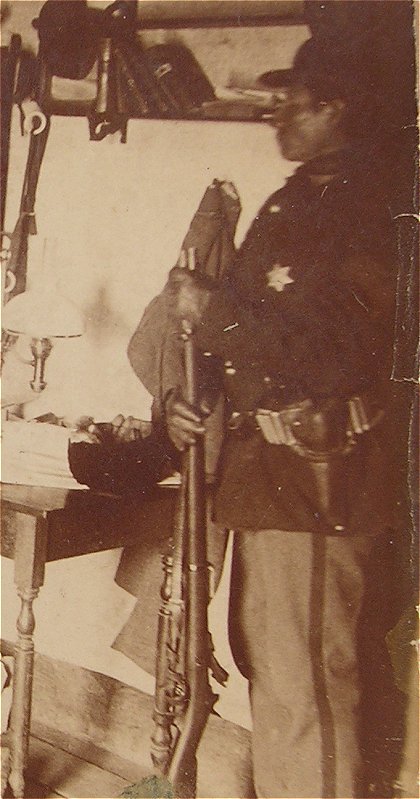 We were able to identify the folks in this Photograph from the caption printed under the Newspaper illustration taken directly from the Image. The caption reads: “Where the graphic dispatches which have appeared in the daily press during the past fortnight where written. The figure on the left is the writer of the accompanying article. The Indian police sentry on the right was guarding the ravine back of the house and was called in to be photographed”. The accompanying article was written by Moorehead (thus identifying him in the photo) and we could easily identify Bartlett (from other portraits) who was Moorehead’s friend and Indian language translator. The location was somewhat of a mystery until we discovered a photograph published on page 124 of the volume titled “Eyewitness at Wounded Knee” (Jensen, Paul and Carter; Nebraska State Historical Society, 1991). That image shows Marshall George Bartlett standing in front of the combination Post Office and Store owned by Louis Mousseau with its small attached log cabin residence. The caption led us to believe that the Image offered here was taken in the residence of Mousseau. That caption reads “The first news stories of the killings at Wounded Knee were written in the small log cabin shown here, just behind the Wounded Knee Post Office… The small cabin was the home of Louis Mousseau, a French-mixed blood, who operated the combination Post Office and store. This was the nucleus of a small community. There was a day school, a little used Presbyterian church and a nearby dance lodge. George Bartlett (standing) had a financial interest in the store.”. The caption to this photograph seems to identify the location of the Photo offered here (by its reference to the earliest reports of Wounded Knee and the connection with George Bartlett) but also likely identifies the unknown white man in the image as the owner of the home – Louis Mousseau.

George E. Bartlett was a quite fascinating character – a U.S. Marshal for Pine Ridge Agency as well as for a city west of there already infamous as Deadwood, South Dakota. Bartlett had worked as a sales representative for the gunpowder company and also ran a small trading post of his own on a creek through part of the Pine Ridge Reservation. From his wild days as a Pony Express rider and then Marshal in Deadwood, Bartlett had picked up the Indian name “Huste,” which was explained to be a dialect word for “Wounded Knee”. Bartlett had been sent to Pine Ridge in hopes that he could negotiate an end to the “Ghost Dance Troubles”. 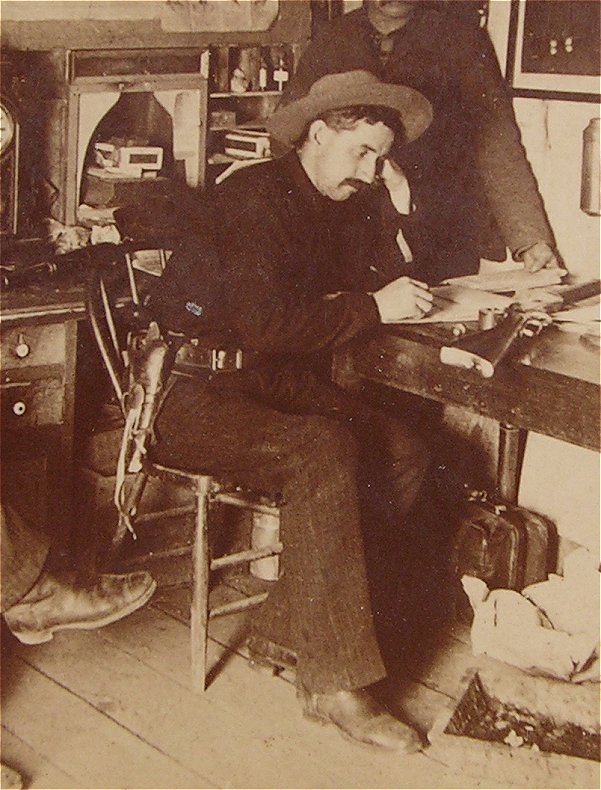 In early 1890 Bartlett had invited a young writer / archeologist / anthropologist by the name of Warren King Moorhead out to visit him and had taken him around to the camps and settlements of the Lakota Sioux across the Nebraska/South Dakota border. After the relative success of the author’s novel “Wanneta” (which included much material gathered in this earlier visit) Bartlett had continued to suggest Moorehead come out again to write about this Ghost Dance phenomenon. With the support of an editor at “The Illustrated American”, Moorehead traveled to Chadron, Nebraska where Bartlett owned a ranch, and quickly found himself welcomed in the camp of Red Cloud, a greatly respected Lakota leader. 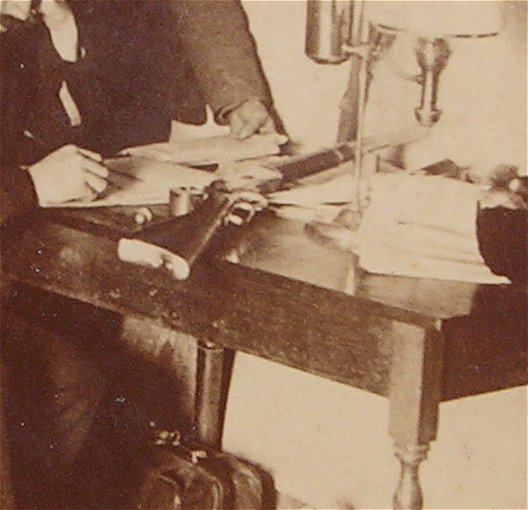 Moorehead never claimed to speak any of the Lakota dialects he encountered, but the articles he later wrote included a variety of Indian words, and of course his friend and guide George Bartlett spoke a number of Sioux tongues quite well. During this time Moorhead took some of the only photographs of the Ghost Dance ceremony seen before the Wounded Knee Massacre. After almost eight weeks of travel and camping among the various settlements across the Pine Ridge area, he was called into the headquarters of Gen. John R. Brooke, commanding officer of the Department of the Platte. According to Moorehead’s journal, Brooke informed him that as he was the only correspondent who spoke the “hostiles” language, and was accepted enough to overnight in their camps, he was considered a liability to the Army as they tried to bring order to the Pine Ridge situation: so two soldiers would escort him directly to his quarters, watch him pack, and take him to the next train east. Bartlett, however, remained behind and is seen in various photographs taken by Trager and W. R. Cross in the days following the Wounded Knee Massacre. Moorhead returned to Pine Ridge just after New Years Day 1891 and began reporting on the aftermath of the massacre. George Trager and his Northwestern Photographic Company photographers are best known for the Photographs taken in the days leading up to the Battle of Wounded Knee and for those taken of the aftermath of that bloody massacre.

One Response to Wounded Knee Indian Massacre: Rare View Of The “Press Headquarters”