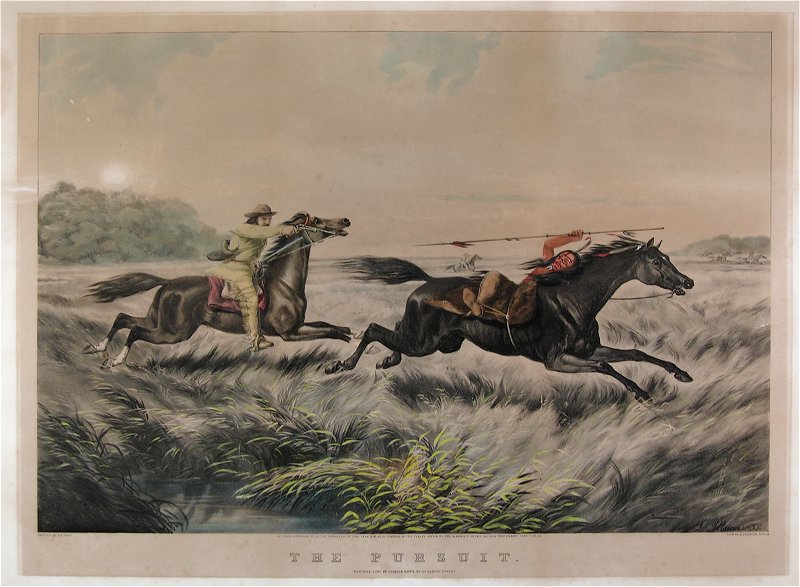 Pictured above, for your enjoyement, is a 1856 Large Folio N. Currier (later of Currier & Ives) Hand Colored Western Americana / Native American Indian, Stone Lithograph titled “The Pursuit,” after the original painting by Alexander Fitzwilliam Tait. Measuring approx. 25 3/8 x 17 1/2″ (image area), it is marked at the lower left hand corner “Painted by A. F. Tait” and at the lower right “Litho By N. Currier, New York.” The lithograph is copyright 1856 by N. Currier and signed in the stone “L. Maurer ’55.”

Currier & Ives often based their prints on paintings and “The Pursuit” was drawn on stone by Louis Maurer (a fine artist in his own right) from the Arthur Fitzwilliam Tait original of the same name, painted in 1855. Historians often criticize Currier & Ives in general, and Tait in particular, for the blend of fantasy and reality in their images of the West. In many cases, the prints represented the West as a triumph not of the white man over the wilderness, but over the Native American. The images often promoted the very personal and often armed conflicts between the frontiersmen and the Native Americans living on the Great Plains, rather than the larger military conflicts.

In “The Pursuit,” a frontiersman dressed in buckskin dramatically gallops across the prairie on horseback as he chases a Native American warrior, also on horseback. In the background, several other Native Americans flee from a second frontiersman. The drama of the scene is heightened by the intense looks of concentration exhibited by the hunter and Native American, the bulging, terror-filled eyes of the horses, and the wind-blown grass in the foreground. The break in the clouds echoes the shape of the warrior’s spear and reinforces the deadly seriousness of both participants in the chase.