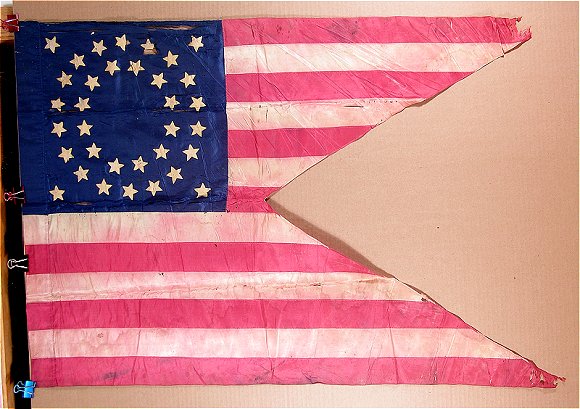 This is a historically important, circa 1861 Civil War, Arsenal Issue Silk Cavalry Guidon – a Swallowtail American Flag from an unknown Union Army Cavalry Regiment that Fought at the Battle of Gettysburg. This breathtaking, blood stained Guidon was discovered with a 1917 newspaper account of its “rescue” by a Soldier belonging to the 18th Massachusetts Volunteer Infantry from beneath fallen Cavalrymen and Horses as the 18th Mass moved into position on the Battlefield at Gettysburg on July 2nd, 1863.

Before I even attempt to describe this awe-inspiring Civil War Flag, let me first state that it is with the deepest respect and humility that we offer for your perusal, this important, and previously undiscovered relic of one of the most devastating Battles in American History. This Guidon is stained with the blood of proud and heroic men who lost their lives defending it and we offer it here believing that the Providence which has preserved it for almost 150 years would approve of our humble effort to make certain that it will be remembered and honored not for what it is but for what it stood for in the hearts of the Cavalrymen who struggled beneath its Colors.

The Physical Description:
The Flag is an Arsenal Issued, Cavalry Guidon made of a fine silk and measuring 27 3/4” at the hoist by 39” in width (fly). It a Standard, Swallowtail shape with a field made of 13 alternating white and red stripes. The canton measures 14 1/2” at the hoist by 15 1/2”. The canton is a blue silk with 34 hand painted, white stars arranged in 2 concentric circles (the inner circle with 12 stars and the outer circle with 18 stars) with a single star at each corner of the canton – a total of 34 stars. The Flag is entirely hand sewn except for the stars which are painted with a thick paint – the stars actually seem to have a slightly gold tint but we are unsure if this is actual color or if it is just a remnant of the light in which we viewed it.

The Guidon has some areas of the field where exposure to the elements (during its time of use during the Civil War we believe) have caused the color of the red strips to run onto the white stripes giving them a pinkish hue. There are also a number of small, rust colored spots which are unquestionably blood stains. The Flag is in very well preserved condition. It was discovered, less than carefully folded in a shirt box where it had reposed since 1917 – the last time that it had seen the light of day. At that time the Guidon was on display for 2 days in Attleboro, Massachusetts. It appears that the owner (another soldier from the 18th Mass Infantry) folded the Flag and put it away at that time and it remained undisturbed until we unfolded it a single time to take the scans found below. But we are getting a bit ahead of the story.

The Information About the Flag’s History that Came to Us With The Flag:

The Guidon was found with a small newspaper clipping from the June 14, 1917 edition of the Attleboro Sun (we have confirmed the date of publication of this article). A scan of that clipping is included below but we will reproduce the text in full here as it gives the starting point for research on the Flag.

The clipping has a headline that reads “RELIC OF GETTYSBURG IS SHOWN”. The article reads:

“A most valuable souvenir of the Battle of Gettysburg and a striking reminder of the Civil War and flag day is contained in a window display at Kent & Eliot South Main St. jewelers. It consists of a silk flag picked from beneath a pile of dead cavalrymen by a member of the 18th Mass. of which Charles M. Burbank, owner of the relic, was a member. Mr. Burbank was prevailed upon to allow a public view of the relic before having it encased in glass as a historic keepsake.

“The flag is tattered in a way that denotes long service. Evidently it was the standard of a troop of horsemen. Of silk, hand made and most carefully stitched and with painted stars. It shows discoloration only where the rain washed the white into pink and where rusty stains tell of the blood sacrifice of the men whose dead bodies covered it.

“The 18th Mass., on its way into action at Gettysburg, passed the spot where a tangled heap of men and horses told of a repulse. A Bay State soldier saw the flag and rescued it from the pile of dead. Later, when he was wounded, he presented the emblem to Mr. Burbank in whose custody it has been since.

“The flag will be on view tomorrow also.”

After obtaining concurring opinions from experts in the field, we first determined that the Flag was a standard Arsenal Issue Cavalry Guidon issued during the Civil War. Cavalry Regiments were not allowed to display the American Flag until the start of the Civil War and during the War each Cavalry Regiment was issued on Guidon form American Flag of the material, construction and configuration of the Flag offered here.

We determined from Civil War Records that Charles M. Burbank did serve in Company D of the 18th Regiment Massachusetts Volunteers but that he was discharges in January, 1863 – fully 6 months before the Battle of Gettysburg. The Newspaper article, however, states that the Flag was recovered by an un-named soldier from the 18th and “presented” to Burbank after that soldier had been wounded (and likely sent home to Massachusetts where he and Burbank reunited).

With the help of 2 amazing historians of the 18th Mass Volunteers (the 18th is one of the few Civil War Regiments that has no published Regimental History), we were able to trace the movements of the 18th in the weeks leading up to Gettysburg. On July 2nd, the Regiment marched from its camp ( a distance of approx 4 miles) to take up a position on the Battlefield at Gettysburg
(Click here to see a plan showing the position of the 18th when it first entered the Battle).

If the story regarding the “rescue” of the Flag told in the newspaper clipping is true, then it is most likely that the incident would have occurred on that march.

We also researched Charles Burbank’s GAR Post (Post #145 in Attleboro, Mass) in hopes that there was information regarding the Flag somewhere in the Post records. We did find an 1894 report about Post #145 which lists all of the Relics on display at the Post and no mention of this Flag is made. There is some confusion, however, because Burbank originally returned to his home town of Mattapoisett, Mass after the Civil War and only later moved to Attleboro where he became a member of Post #145. We are now trying to track down records of any other GAR Post that Burbank may have been a member of before moving to Attleboro.

At the time we sold this awe inspiring Civil war Cavalry Flag there were many questions to be answered regarding its history and to our utmost satisfaction the Guidon was purchased by a Colorado Museum – “The Museum of the Horse Soldier” where , not only will that research be continued but into the hands of those who will have it expertly and respectfully conserved thus insuring its preservation for generations to come. The Guidon will be displayed with other historically important Cavalry Flags where it can be viewed by the public and where the compelling story of the men who so proudly served under it, can be told and thus remembered.